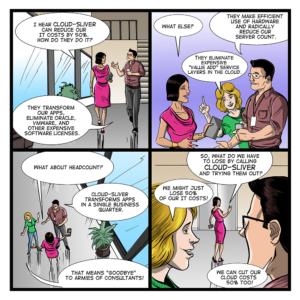 Working with CEOs of raw startups offers lots of surprises. One of the most common—it is no longer a surprise, is their shock that the industry does not beat a path to their new product.

The startup CEO often sees his or her solution as something the world desperately needs, thus as soon as people hear about it, the demand gates will burst. Then, painfully, the reality sets in that the first 20 people they go to do not buy, show no interest other than what is required by good manners.

That CEO digs into the messaging, often toiling late into the evening with all the great features, all the benefits culminating in how this product will solve some huge problem everyone has wrestled with for decades.

This process can take many iterations—and it is painful. One realization that eventually comes is the CEO/CTO product builder is the LAST person who should build out the messaging—they are way too close to the problem.

A very good exercise is to use the oldest way of communicating—the story—to introduce the product. Nobody remembers a tag line from a software company, nobody cares much about the features or benefits and certainly nobody can recite them after hearing them once.

But a story? A story lasts forever. Each of us can remember stories we heard decades ago—but we cannot remember what was on a classroom wall, in 3rd grade, in a room where we spent every weekday for 8 months.

We were working with a raw startup in the security space. They had a novel product that secured data in a way nobody else had ever done. How they did it was quite technical and that is the story they liked to tell.

One day we were with them as they pitched a major telco. After the presentation, when the good stuff really happens, the telco security person asked if they could secure a cell phone, tablet—or any mobile device.

Sure they could, but the CEO was focused on corporate databases. The telco security person continued—-couldn’t their technology just be downloaded to a cell phone, and protect it from any other downloaded app?

It could. Then the telco person told the CEO his story:

They have thousands of new employees bringing in their cell phones and tablets—but the company was forcing these employees to use company phones.
The best candidates would not give up their personal devices.

So they could not hire the best people.

But if they allowed employees to access corporate secure data, their entertainment, photo, texting apps could be compromised.

All the marketing materials were rendered useless by this little story.

And the CEO of the tech company went forward that day and in every presentation he told that story—and why his company developed their security product to protect BYOD (bring your own devices).

And his presentation went from 30 Powerpoint slides to 2.